Episode 66: Stacey is still missing, Lauren flings her drink, we debate the Michael Phelps shark race, break down the birds with teeth strippergate punishment and hand out part 1 of our tv obstacle course superlatives.

Listen to “Episode 66 We Flung the Fling” on Spreaker.

We were very excited that Leigh got to participate in the sharin’ beer this week, which came to us via Moonlight Meadery by way of the Casual Pint in Downtown Lexington.  Side note:  The Casual Pint is a chain store that sells packaged beer/cider beverages and has various items on draft for purchase there or as growlers to go.  They also serve food.  Moonlight makes a variety of mead products (all of which are gluten free due to their distilling process), including a rum barrel aged cider that Leigh tried on an earlier show and liked for the most part.  Unfortunately neither Leigh, Carrie or Lauren liked Fling (a rhubarb and strawberry mead) very much.  In fact on accident or possibly on purpose no one is sure which, Lauren unceremoniously “flung” her share across the table and onto Carrie’s phone before we even started recording.  (note the phone is fine).  Either way, however, she did have enough left to taste and determine that it was just too boozie and sweet.  In fact we a pretty much all agreed with that assessment.  Leigh also felt that the ruhbarb was a little overpowering.  Leigh will definitely be trying Moonlight products in the future, but at 14% Fling is definitely one you will want to share or at least drink in very small doses.

Leigh’s pick this week, Original Sin’s Apricot Cider, again comes courtesy of the Casual Pint.  This isn’t a flavor of Original Sin that Leigh had seen or tried before.  It was very drinkable after the Fling, not too sweet with just a hint of apricot.  Worth a try especially if you like Original Sin products and haven’t had this one before, or if you’re just looking for a new cider flavor in general.

Since Wednesday marks the official start of summer, Lauren’s pick this week comes from Anderson Valley and is aptly called Summer Solstice.  Although this beer is  creamy and slightly malty it does have a clean finish.  Lauren thought it was a decent summer ale, nothing to off putting, but probably not a first choice out of the cooler. 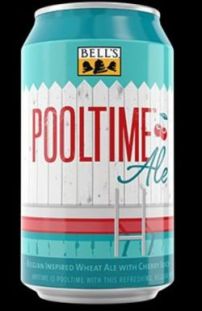 Continuing to carry the flag for Stacey and summertime beer in a can, Carrie picked up Bell’s Pooltime Ale.  This Pooltime Ale is a Belgian Wheat beer with cherry juice added.  The beer was ok, but a belgian wheat wouldn’t be a first choice for the pool in our opinion.  Also, Carrie felt that the beer lacked any cherry flavor or distinct tartness of cherries, which would have helped to cut the slightly heavy wheat flavor.  If you like belgian wheats and are looking for something with a cool name and cool art work that would look good sitting by the pool then go ahead and pick this up.