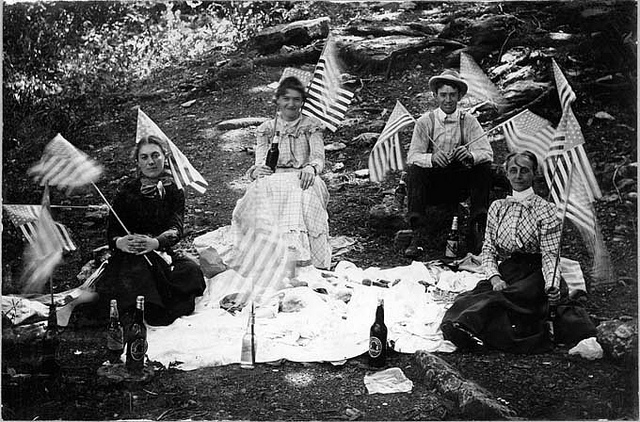 Celebrate the 4th of July this year like a true patriot by playing these four games straight from the 1700’s and 1800’s, stay away from the fifth one.

Quoits:  A throwing game in which heavy metal rings are tossed underhanded or pitched at short metal stakes driven int the ground.  Quoits is the predecessor to Horseshoe Pitching.  It came to America in the 1700’s, but it evolved into what is now known as Traditional American Quoits (note the British version is completely different).  It’s still played in Pennsylvania, New York and New Jersey.  Check out the United States Quoiting Association for more information.

Nine Pins, Skittles and Bowls:  This is basically lawn bowling.  Nine pins is still played today, around the world.

Dollar Pitching:  Usually played by four people with two silver dollars, the silver dollars are pitched into small round holes made for that purpose.  The holes are from 15 to 20 feet apart, each player tries to put his dollar in the hole.  We all agreed that this very similar to washers.

Long Bullets:  Played with a large iron ball, usually weighing several pounds, slung in a strap or thrown.  There are two goals and two sets of players.  Thos near the gal had to prevent the ball rolled in their direction from passing their goal, the winning side succeeds in rolling the ball with enough force to pass the other team’s line and scored the greatest distance doing so.  Andrew Jackson was an expert in throwing the long bullet.  Because the game was played on streets and highways on Saturday afternoons many towns and states passed laws against it for safety reasons.  The game eventually died out, but there’s no reason it can’t be revived, just remember to always call Game Off! when a car is approaching.

THE ONE GAME YOU DON’T WANT TO PLAY:

Gander Pulling:  Take a goose, clip its feathers short on its neck then grease it.  Suspend the goose from a bar between two poles.  A horseman then dashes under the bar at full speed and grabs the goose’s neck and tries to pull its head off.  It often took hours for someone to win.  The winner’s prize usually consisted of contributions made by spectators, sometimes the winner got the goose’s body and he also got drinks.  This game generated lots of betting.

So there ya go, four games you should definitely play this 4th of July to celebrate ‘Merica and one that you really really shouldn’t.  Even if you don’t play any of them make sure you drink plenty of beer, grill plenty of meat and blow up lots of stuff….