In this episode we are joined by Mary Struckhoff Transylvania University’s Senior Associate Athletic Director, but before she was that she spent 20 years as a D I,II and III basketball official, in addition to working as a the National Coordinator for NCAA Women’s Basketball Officiating. In other words, she knows a lot about NCAA basketball officiating and how it works and we have a great conversation about it. Also she brought Jell-O shots, which just makes her even more amazing. Find out how Carrie got completely punked by Taco Bell on April Fools Day, we make our picks for the NCAA tournament final and play a very sports light game of Take It or Leave It. If you wanted to know how officiating in college basketball works, this is the episode for you! Even if you didn’t you should still listen, you just might learn something.

Listen to “Episode 105 April Fish and Fireballtinis” on Spreaker. 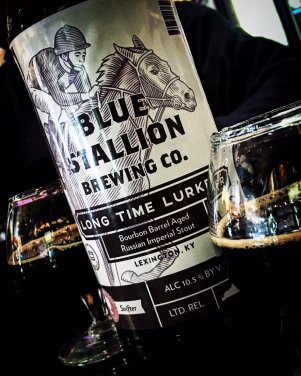 The Sharin’ beer this week’s comes from local Lexington brewery, Blue Stallion.  Blue Stallion makes Ya Damn Skippy the most delicious peanut butter porter on the planet, but until they start bottling that we tried their Bourbon Barrel Aged Russian Imperial Stout Long Time Lurker.  Carrie decided to experiment a little bit with this one and serve it room temperature.   This definitely changed the flavor/complexity of the beer as opposed to pouring it cold and letting it open it up.  Drinking it a room temperature brought out the chocolate and vanilla notes, but also brought out the booziness a bit more.  At 1 liter and 10.5% you’ll also want to share this one, unless you don’t. 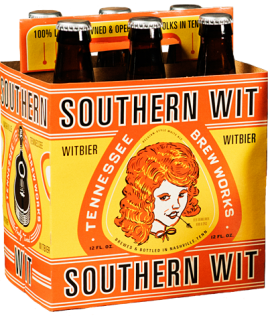 In addition to bringing us Jell-O shots our guest Mary got to choose a beer from the Stanley Manor Studio’s beer fridge.  She went with Tennessee BrewWorks Southern Wit.  It’s a classic WitBier that’s very drinkable.  Not to wheaty, it’s got a nice orange flavor to it and Mary who is a big fruit beer fan really enjoyed it.  We’re not saying it’s a fruit beer, but it checks all the boxes of a Wit, so there is some orange flavor to it.

Leigh really enjoys the White Claw spiked seltzer, so when Carrie saw this she thought Leigh might also enjoy it.  Truly makes a variety of flavors of their Spiked & Sparkling water, the one Leigh had this week was the pomegranate flavor.  Leigh was not a huge fan of this one, it smelled like an alcopop beverage that you probably drank at high school parties.  Despite the smell the flavor actually wasn’t sweet, but Leigh’s biggest complaint was that it was too carbonated.  She may be open to trying other flavors, but in our opinion if you want spiked seltzer go with White Claw.

Everyone is super excited that we can now buy Yuengling in Kentucky, so Lauren decided to check out their Black & Tan.  Traditionally a black and tan is a layered beer so there was some skepticism as to whether or not it being mixed in a bottle would actually effect the overall black & tan flavor or experience.  Even though we all love Yuengling and Yuengling Light, Lauren was not a fan of the black & tan.  It’s flavor just wasn’t distinct nor similar to a black & tan.  If you are going to drink a black & tan you probably want to get it on draft in a bar that serves them.

Carrie’s pick this week was chosen strictly for the label.  Three Floyds Space Station Middle Finger.  The name and the bottle art work alone makes you want to buy this beer.  Luckily it’s not just the name and the art work that is awesome, the beer an American Pale Ale is really pretty delicious.  Not hoppy or bitter, this beer has a very smooth, refreshing almost hint of orange flavor on the backend.  Buy it for the name and the label but stay for the beer.

In this episode we welcome Mary from A Sip of Sports as our first ever full show phone guest. We find out what A Sip of Sports is all about, talk surviving St. Patrick’s Day, recap our visit to Lemons Mill Brewery, let you know what you should be watching on TV right now, talk the insane weekend that was the First and Second Rounds of the NCAA Tournament, try to find out what makes a Cinderella at this point and play a new round of Take It or Leave It.

Listen to “Episode 104 Even Geoffrey Giraffe Couldn’t Make it Out of March” on Spreaker. 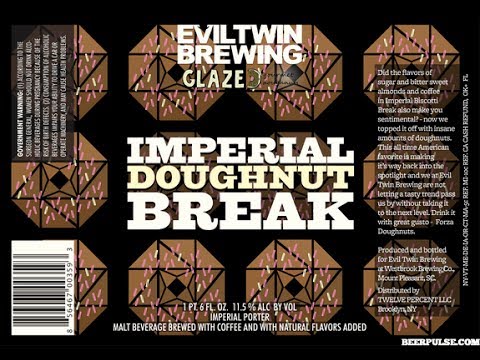 Lauren and Carrie split a can of EvilTwin Brewing’s Imperial Doughnut Break this week.  Doughnut Break is an Imperial Porter with coffee, vanilla, almonds and doughnuts added.  This beer was fine for an imperial porter, it poured slightly thick and was rich and dark in color.  Even after letting it warm up, however, neither Lauren or Carrie got much vanilla, almonds or doughnuts from it.  It had a decent coffee flavor to it, but beyond that we didn’t get much from it.  At 11.5%, however, it wasn’t super boozy, we just aren’t sure that the price point of over $9 a can it warrants picking it up.

Leigh was super excited about her beverage of choice this week, Angry Orchard’s Rose’ is a cider that she has been looking for and wanting to try for a while.  She was in luck this week because the Liquor Barn in Hamburg here in Lexington Kentucky finally had some in stock.  She was not disappointed in this one at all.  It was very drinkable and slightly dry.  Many times when you see a beverage with a pink color, you think it’s going to be on the sweet side.  Leigh was definitely happy that this wasn’t the case, which is a good thing because they only came in 6 packs, so Carrie still has 5 more at her house.

We are all ready for spring to begin and Smarch to go away and Lauren definitely brought that sentiment to the table with her choice of Taft Brewing’s Nellie’s a Key Lime Caribbean style ale.  Taft Brewing is right up the road from us in Cincinnati and we were happy to see that they are canning and distributing in our neck of the woods.  Lauren stole this from Stacey’s beer fridge stash, but it was absolutely worth it.  This is a very light, refreshing beer that isn’t overpowered with key lime flavor.  It definitely avoids any kind of artificial or chemically flavor and at 4.8% is a beer you could have more than one of.  This would be a great patio/lawnmower beer.  We highly recommend looking for this one in your area when the weather finally lets us sit on the patio without the threat of snow. 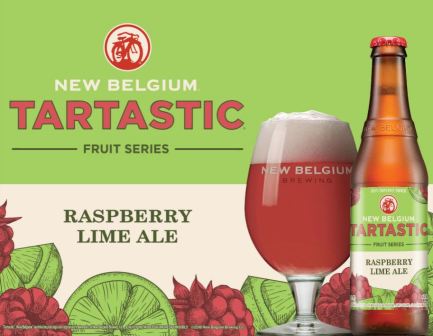 Carrie is also done with winter and it showed with her pick of New Belgium’s Tartastic Raspberry Lime Ale.  This is again is a nice refreshing fruit beer, that has a great balance of fruit and tart.  The raspberry and lime aren’t overpowering or chemically tasting and the sour adds to the flavor rather than distracting from it.  Add this to your list of porch sitting/lawnmower drinking beers when the winter finally takes a hike.

In this episode we are joined by Chandler and Jen from Lyle’s BBQ in Lexington Kentucky. We talk all about bbq, their podcast Behind the Bluegrass and what constitutes Kentucky Burgoo. We also discuss if the stache or the beard is greater, based on Carrie’s appearance on Scout Team Sports Radio, we shout out to USA Rugby 7s for winning the World championship, and of course play an awesome round of Take It or Leave It. Want to know what the hell Chicken Mull is, you’re just gonna hafta listen.

Lauren and Carrie split the sharin’ beer this week, which both were actually very excited about.  We always love finding imports from Craft Breweries outside of the United States and we were thrilled when we came across Colorado’s (Brazil’s Craftiest Brewery) Bertho.  This import from Brazil is a Dark Ale brewed with Brazil Nuts.  Lauren and Carrie thought the complexity of the favors was very interesting.  It started out very sweet and malty, but as it warmed up that sweetness went away and a more nutty flavor came through.  It was a very nice beer and if you can find it we highly recommend picking it up.  We also recommend drinking it at room temperature, it definitely got better as it warmed up.

Our guest this week Chandler was all about LandShark Lager.  Landshark Lager is a Jimmy Buffet beer and actually we’d agree with Chandler’s assessment that it’s better than Corona.  Even though it’s still technically winter here in Lexington, Kentucky Chandler was trying to call the gods of summer with the LandShark.  We can’t disagree with his reasoning and again this is a solid beer to test that theory with.  It’s a great patio beer even if the patio you’re sitting on is still 30 degrees. 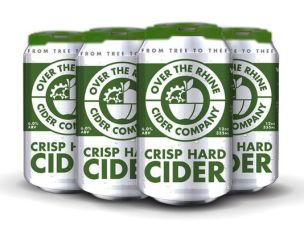 Leigh was very excited this week to venture out to the Stanley Studio beer fridge and find that Lauren had been collecting cider for her in a special cider drawer.  She was also excited to find that one of those offerings was something she had never had before from a place we had no idea existed.  Over the Rhine Cider Company in Cincinnati Ohio, which again we didn’t know was a thing.  Leigh tried their Crisp Hard Cider and found it to be pretty good, not too sweet and what you want in a standard cider.  She felt like she could definitely have more than one without being overpowered with sweetness or feeling too full.  We’re excited to find more of their products.  A visit to Cincinnati might also be in order.

Lauren’s pick this week comes from Prairie Artisan Ales and was picked mainly on label artwork.  Their Brett C. is a farmhouse ale brewed with cascade and citra hops with a touch of sea salt.  Surprisingly this was a very well-balanced beer.  Sometimes the addition of Brett, especially to a farmhouse style ale can make it too sour.  This wasn’t the case here, however, the citra and cascade hops helped to balance out the sour and the allowed the Brett to give the ale a more earthy flavor.  If you’re looking for something with a complex earthy flavor that isn’t too sour definitely check this one out.

Carrie decided to stay in state with her pick this week (sorry we couldn’t find a picture of the exact can, but it does have a picture of a cow on it if that helps) with MileWide Beer Company’s McPolye Milk Stout.  MileWide is based in Louisville Kentucky, and they produce a variety of different styles.  We highly recommend their Barstow, which is a super easy drinking American Pale Ale.  Their Milk Stout is also pretty easy drinking.  With  nice balance of light and dark, there is some sweetness but it does a nice job of balancing out the heaviness of the stout.  Definitely a good representation of that style of beer.  Of course we recommend picking it up and supporting Kentucky Breweries.