Stacey is in and Leigh is out, but we’re joined by Rebecca and Ben from lovemebrew.com to talk all things craft beer. It’s Lexington Craft Beer Week and Ben and Rebecca discuss their love of craft beer and why they probably won’t go back to the Derby! We have one RIP this week, and Carrie can’t believe that Lauren didn’t know who it was. We learn some things about Wikipedia in the fact of the week. And Rambo, Bill & Ted, the Royals and pretzel necklaces make an appearance in Take It or Leave It! Grab a beer and drink along with us!

In honor of the derby last week our guests from lovemebrew.com Rebecca and Ben shared Braxton Brewing’s Kentucky Home Mint Julep Style Beer.  At 9.5% they agreed that this was a beer that was made for sharin’.  Rebecca wasn’t a big fan of this one, she didn’t get much mint off of it and found it a bit too sweet and wasn’t sure what the base beer was.  Ben enjoyed it, but again said that he probably couldn’t drink the whole thing by himself.

Stacey had left another beer from Golden Road at the Stanley Manor studios, but Lauren drank it, so she had to go with another choice from Golden Road, Hazelnut Hills brown ale with hazelnut flavor.  Overall this is a good beer, but it’s one you would want to drink during the fall because of it’s rich brown flavor.  Lauren drank the lawnmower beer becasue Stacey left it at her house and it was hot outside. 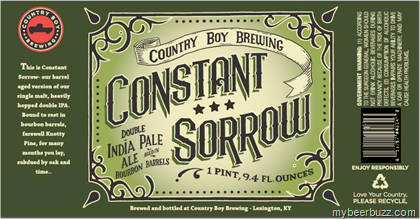 Lauren got a gift from the Ft. Lewis Derby party last week and that came in the form of a special release Country Boy Brewing bomber, Constant Sorrow a Double India Pale Ale aged in Bourbon Barrels.  Full disclosure, this beer had been sitting on top of the Ft. Lewis Beer fridge for about 2 years.  Surprisingly the beer had not turned and was actually still drinkable.  For being aged in bourbon barrels it wasn’t too boozy, and maintained it’s grassy IPA flavor.  This was a special release, so you might not be able to find it, unless you make a visit to Ft. Lewis who still may have a few bottles left.

It’s 91 degrees here in Lexington and nothing beats the heat like a lighter easy drinking beer.  Carrie’s pick this week fits the bill.  Lagunitas’s 12th of Never Ale.  This is a crisp, light, hop forward beer that delivers what it promises.  This is a tall boy can  and at 5.5% there is not reason you can’t enjoy more than one this summer.  Also we can’t wait to call the number on the side of the can on the show and see what happens!  Stay tuned for that!