Leigh’s back from Mexico and we are joined by friend of the show and repeat guest Matt Gordon in the fourth chair. We recap Leigh’s trip to Mexico, find out why Carrie had such an issue with Black Jacket Symphony’s performance of GnR’s AFD and learn about Matt’s Mood Table that he constructed for the Men in Blazers. We have a very depressing Fact of the Week, talk The Masters and of course play Take It or Leave It. If you want to know about the Squirrel you’ll just have to listen.

Listen to “Episode 107 Stop Looking At Me Squirrel” on Spreaker.

The Sharin’ beer and the guest’s beer are one in the same this week.  Matt was kind enough to bring and share a nice big bottle of local Lexington favorite, West Sixth Brewing’s Sixfold Series Wine Barrel Saison.  Unfortunately you can only find/purchase this beer at the West Sixth Taproom, but if you are in the area we highly recommend picking it up.  Although it’s been aged in wine barrels, it’s only 6.5% and really is not very boozy.  It does contain brett, which seemed to help balance out the alcohol picked up by the barrel aging.  Matt, Carrie and Lauren all liked it’s slightly funky, sour flavor and found it very drinkable.  This is one you would not have to share if you didn’t want to.

Back from Mexico Leigh need something that wasn’t super sweet, low in alcohol percentage and didn’t contain tequilla.  She found just the thing in the Stanely Manor Studio’s beer fridge in the form of Crabbie’s Spiced Orange Ginger Beer.  With just slight hints of orange and ginger this not too sweet beverage was just what Leigh needed after partying it up South of the Border.  If you’re looking to branch out beyond either cider or other non malt beverages, check out Crabbie’s full line of ginger beers, including this one.

We are desperate for Spring to finally get here and stay and Lauren was trying to make that happen by drinking a Founders Solid Gold.  Once the weather does finally allow us to mow our yards and sit on the porch this is a beer we will definitely be drinking.  It’s the classic lawn mower/porch sitting beer, low ABV, easy drinking and actually very reasonably priced.  So much so that Lauren bought a 24 pack.  We’re really hoping this does the trick cause we are way over winter at this point. 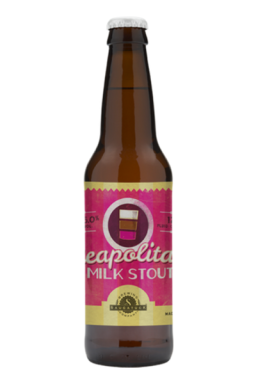 Carrie, on the other hand has completely given up on it ever getting warm and staying warm again so she’s sticking with dark beers.  This week’s selection comes from Saugatuck Brewing Company in Michigan.  We had their pancake beer on a previous show and really liked it and their Neapolitan Milk Stout was no different .  It was similar to Braxton Brewing’s Grater’s Black Raspberry Chip, it had a very nice balance of chocolate and strawberry flavor.  There wasn’t much Vanilla, but no one really likes the Vanilla in Neapolitan ice cream anyway.  Try it at room temperature to get the flavors to really come together.