In this episode long time distinguished, award winning sports writer and UK journalist Larry Vaught joins us. In a bizzaro twist he takes Leigh’s place while Stacey still occupies the 4th chair. We recap Carrie and Leigh’s adventure at the UK Hockey game, find out what it takes to become a Kentucky Colonel, find out where Larry thinks sports journalism is going in the future, Lauren has a real problem with the fact that Carrie’s friend Seth called her out on an ad read, we do the last regular College Football Pick’em of the season and more!

Listen to “Episode 87 We’re on the Highway to Snell” on Spreaker.

No Leigh this week, but our guest Larry Vaught did kind of drink an ode to her with some gluten free ice water……..

The Sharin’  beer this week is one that we’ve heard alot about from various friends New Holland Brewing’s Dragon’s Milk Bourbon Barrel Stout.  This is a well balanced bourbon barrel stout, not too boozy with a nice flavor of vanilla and chocolate.  Lauren got more vanilla from this one than either Stacey or Carrie, but we all agreed that this is a great beer for this time of year and into the rest of the winter.  Light a fire and pop open a bottle of Dragon’s Milk, it will get you through the darkness that settles in at  5:30pm this time of year. 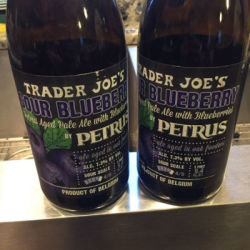 Lauren and Stacey doubled up on the sharin’ beer this week by splitting a bottle of Trader Joe’s Sour Blueberry Petrus.  The had the Trader Joe’s Frambose last week and really liked it.  This other offering from Trader Joe’s didn’t disappoint.  The color was definitely purple, to the point that it looked like it tasted purple.  Both Lauren and Stacey liked this beer, for both it’s fruitiness and it’s sourness.  Stacey felt like this would be a good beer for someone who maybe doesn’t like sours or someone who is looking to get into sours.  Lauren thought that the fruitness was a good seller for anyone who likes or is looking for a fruit beer.  So,  add this and the Frambose to your cart next time you’re in Trader Joe’s liquor store. 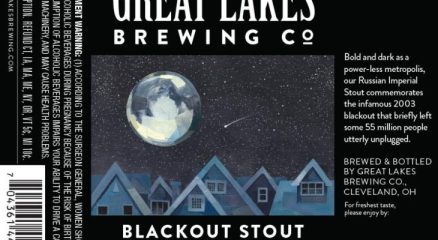 Normally Carrie doesn’t like to double up on dark beers, but she’s all in on the winter beers and also this beer was a great segue into one of our ad reads.  Great Lakes Brewing’s Blackout Stout is a Russian imperial stout that is a tribute to a power outage in 2003, but could also mean what’s going to happen if you have more than 2 of these.  At 9% it will warm you up on a cold winter night.  If you like Russian imperial stout’s definitely pick this one up.  If you are new to this style of beer it’s a good one to start with.  Don’t let it’s darkness turn you off.  It’s very drinkable, it’s got a nice molasses flavor that you want with an imperial stout and really is designed for sipping, let it warm up to let the flavor really come out.  Between this and the Dragon’s Milk you might not wake up until spring.