In episode 68 Stacey goes missing again and we have a theory about that. We discuss the difference between a cover band and a tribute band, give our pick for who would win a Presidential hotdog eating contest, discuss the farce that was the Pacquioa v Horn decision and find out that a gluten free shandy is pretty good. Plus a lot more, you should just listen to find out what. Also big thanks to Ridin Pine Show for sending us some of their Nita Brewing beer, it was delicious!

Listen to “Ep 68 That’s What Freedom Tastes Like!” on Spreaker.

Since we felt bad about the fact that Leigh didn’t get to share in the Zima last week, we made sure to find a gluten free beer this week that we could all try.  Daura Damm is a fairly well-known brand to gluten free beer drinkers, often times it’s the only gluten free beer that many bars will carry.  Leigh had an ”original” Daura Damm on one of the first episodes of the show and did not care for it at all.  In fact we passed it around that episode and all agreed it was terrible.  Like many gluten free beers it suffered from a sorghum heavy taste that ruined any beer flavor there may have been.  Carrie saw their shandy in the singles section and decided that if it was going to be terrible that her and Lauren would suffer too.  We are of the opinion that it’s hard to screw up a shandy, it’s lemonade and beer, but because of our experience with Dauara Damm in the past we weren’t optimistic.  Good news! Daura Damm managed to put out an excellent product.  All three of us were really surprised by the taste.  The lemonade really helped to offset any kind of sorgum taste and made the beer very refreshing.  Leigh was ready to immediately go out a get a six-pack and both Carrie and Lauren agreed that they wouldn’t hesitate to  buy this either.  If you’re gluten free,enjoy beer  and are looking for a refreshing alternative to cider, then this is a must try/purchase for you.  Even if you’re not gluten free this is a solid shandy that you shouldn’t hesitate to try.

Lauren and Carrie both drank the same beer this week courtesy of the Ridin’ Pine Show podcast and Nita Brewery in Ottawa Canada.  Since the Penguins played the Ottawa Senators in the semi-finals of the Stanely Cup Playoffs, Carrie decided it would be fun to make a little wager with our podcast friends from the north (even though they are Habs fans).  If the Penguins won they would send her some of their namesake beer from Nita, if the Senators won then she would send them some quality Kentucky Bourbon (note she sent the bourbon even though the Senators lost).   Since the Senators lost they held up their end of the bet and sent the Nita Ridin’ Pine Show beer, which appropriately enough was delivered on Canada Day.  Lauren and Carrie really really liked this New England IPA.  It was very drinkable, not too hoppy with a good balance of sweetness.  Lauren, who is not a fan of IPA’s said that she would drink more than one of these, Carrie also really enjoyed it, but wasn’t sure if that’s because she was drinking it out of the Stanely Cup cup (insert Habs joke here).  We don’t think that you can get Nita products in the US, which kinda sucks, because we would love to try some of their other beers.  However, if you find yourself in Canada or near Ottawa go visit their taproom and maybe even Smokey and the Bandit some of their products across the border, let us know cause we’d gladly take them off your hands. 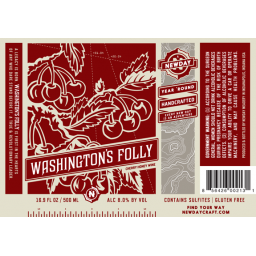 Leigh’s pick this week, Washington’s Folly from New Day Craft Mead & Cider is a tart cherry mead that has a great balance.  Leigh’s had New Day products on the show before, their Magpie was one of the best fruit meads or beers we’ve ever tried, but at 14% was pretty high gravity.  Washington’s Folly is 6% and very drinkable, it really is the perfect balance of tart and sweet.  The cherry flavor wasn’t overpowering, in fact we all tried it and agreed that the balance between tart and sweet was damn near perfect.  This is a gluten free product, but even if you aren’t don’t let that deter you from picking it up, especially if you are looking for alternative to cider or fruit beers.