Need a break from Dyngus Day festivities? We’ll talk about what that is and much more in our latest episode, from what’s happening in the English Premier League to hockey to spring college football games and whether or not craft beer names have become too risque. With the GBS squad, you probably have a good idea of where we fall on risque names (um, Just the Tips?). We’ll also reveal whether the squad is on Team Ears First or Team Tails First when it comes to consuming a chocolate Easter rabbit. Give us a listen and tell your friends! #gbspodcast #wedowhatwewant 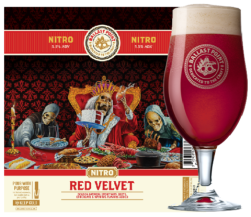 The Sharin’ Beer this week comes from Ballast Point.  Their Nitro Red Velvet is a Golden Oatmeal Stout made with Chocolate and Beets.  Stacey and Lauren didn’t care for this beer at all.  Lauren had a strong opinion on it, you’ll have to listen to the episode to find out what that is, but let’s just say she compares it to something you wouldn’t want to drink.  Carrie didn’t think it was terrible and tasted a bit like cake on the back-end.  All three girls agreed that the color was more like Kool-Aid and that it would have been better as a porter.  They did like the art work on the bottle, very reminiscent of the Goonies but with food instead of treasure.

Leigh’s pick this week comes from Sweden, via Pivot Cidery.  Make Momma Proud is a Passionfruit Cider produced by Slim Pickens Cider and Mead in Sweden and imported by Shelton Brothers, Belchertown MA.  Leigh did enjoy the cider, but felt like the passionfruit overpowered any other flavor that it may have had.  If you can find it in your area it’s definitely worth a try.

Stacey’s pick this week is one of her favorite beers, but is not one that she has had on the show.  Tripel Karmeliet from Brouwerij Bosteels in Belgium.  This is a Abbe Tripel that has blends wheat and oats together with a spicy lemon dryness.  At 8.4% it is very light and drinkable.  Although it is excellent in the bottle, Stacey definitely recommends trying it on draft if you can find it. 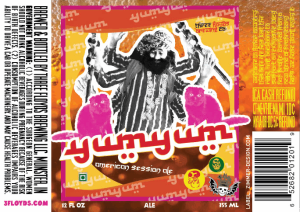 Lauren’s pick this week is from 3 Floyds Brewing.  Don’t let the label fool you, Yum Yum is not a Bollywood beer, it’s an American Session Ale.  Once again very cool bottle art work, but not great beer.  Lauren gave it a half a yum, it was a pretty standard American Session Ale, but she probably wouldn’t go out of her way to get again.

Carrie’s pick this week also comes from 3 Floyds.  Rabbid Rabbit is a Saison Ale, and according to one of Carrie’s connections at Liquor Barn is a seasonal beer that apparently people buy by the case.  Since it is a Belgian Style Ale it was very reminiscent of Avery White Rascal or a general Witbier.  Although being brewed with brettanomyces it did not have any sourness to it.  It wasn’t a bad beer, and is worth a try if you are looking for a sasiosn with not a lot of sourness and witbier overtones, not sure about buying it by the case though.